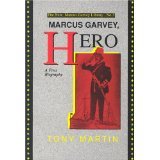 "There is a great need for this book with its easy style, but knowledgeable coverage suitable for the non erudite reader. The author recommends the book for use in secondary schools and the first and second year University Courses, but I would go one further and recommend it to anyone who loves to read." SUNDAY GUARDIAN (Trinidad)

"The strengths of this introductory biography are its readability, its straightforward organization, and its comprehensive touching on the major events and major issues in the movement across four continents and the islands." Patrick Manning, JOURNAL OF CARIBBEAN HISTORY

Professor Martin has authored, compiled or edited 14 books including Caribbean History: From Pre-Colonial Origins to the Present (2012) published by Pearson. Earlier works include Amy Ashwood Garvey: Pan-Africanist, Feminist and Mrs. Marcus Garvey No. 1, Or, A Tale of Two Amies, Literary Garveyism: Garvey, Black Arts and the Harlem Renaissance, and the classic study of the Garvey Movement, Race First: the Ideological and Organizational Struggles of Marcus Garvey and the Universal Negro Improvement Association (1976).
Martin qualified as a barrister-at-law at the Honorable Society of Gray's Inn in 1965, did a B.Sc. honours degree in economics at the University of Hull, and the M.A. and Ph.D. in history at Michigan State University.

His writings appear in such reference works as the UNESCO General History of the Caribbean; the Oxford Dictionary of National Biography and American National Biography. His awards include a grant from the American Philosophical Society. He has reviewed articles and programs for scholarly journals, the National Endowment for the Humanities, and the Austrian Science Fund. His biographical listings can be found in Who's Who in America; Who's Who in the World; Personalities Caribbean; Who's Who Among African Americans; and elsewhere. He has been a reviewer and consultant for publishers and has served as an expert witness for Congressional hearings.