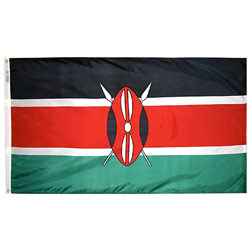 The Kenya flag, based on that of the Kenya Africa

National Union, was adopted in 1963. The black stripe represents the

black majority, red represents blood spilled during the struggle for

freedom, and green represents the land. The white fimbriation was added

later and stands for peace. At the center of the flag is a traditional