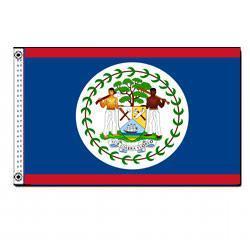 The Belize flag is blue with red stripes across the top and bottom. The crest is based on the country’s colonial badge and represents the logging industry that first led to British colonization. The 50 olive leaves around the crest represent 1950, the year Belize began to seek independence. The motto on the crest reads Sub Umbra Floreo, or “I Flourish in the Shadow,” and refers to Belize’s period of colonization. The current flag was adopted in 1981. Belize’s flag is unique because it includes three more colors than any other national flag and is one of the only countries to have humans depicted as a major design element on its national flag.