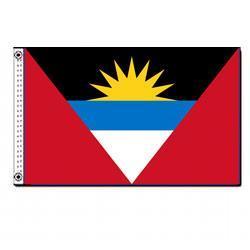 Antigua and Barbuda adopted this flag on February 27, 1967, when they became a self-governing colony. The twin islands gained independence from the British in 1981, after nearly 350 years of colonialism. This flag was designed by Sir Reginald Samuel, a high school art teacher, whose design won in a contest of more than 600 locals. The star/sun represents the dawn of a new era, the red represents the energy of the people, and the black represent’s the people’s African heritage. The yellow, white, and blue combination represents sun, sand, and sea.